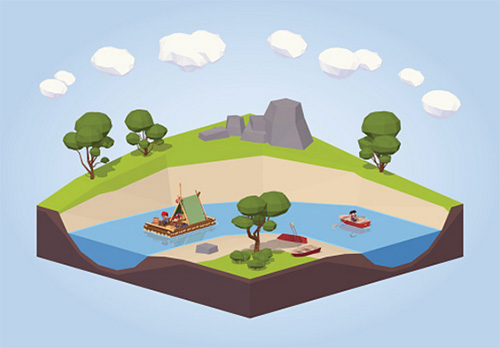 Mega-Fiers (aka Megafiers) is one of the most impressive Unity Assets I’ve ever come across on the Asset Store. In its heart beats a powerful, robust and feature-rich mesh manipulating system. To use it, just add one of its Modifier Components to your Game Object and you can deform, morph and animate its 3D form both at Runtime and in the Editor. This leads to many exciting opportunities!

The Megafiers Unity Asset contains over 50 different modifier components. You can even add multiple deformers to the same Game Object! Let’s review its most important features:

Megafiers comes with many Components which you can use to animate the bending, twisting, stretching and morphing of 3D characters, units and even landscapes. For example, this allows the complete customization of Player Avatars and important NPCs (non-player characters). Click on the image with the faces to check out the possible animations.

Access all properties directly from your C# and JS scripts

Tweak the 3D meshes at runtime and integrate the distortion of objects into the gameplay. Check the example of that next to this paragraph – it is from one of our upcoming Ironic Games, where the player’s body shape is changed (using a Vertex Modifier) from eating too much junk food!

Pro Tip: to greatly improve performance, always disable the Modifier Component when you are not updating the mesh. Otherwise it would continue to occupy memory and take up valuable render time. Here is a simple example how to control a Spherify component (which makes a mesh more round) directly from your C# script:

But this is not all! Megafiers comes with additional cool features:

– Deformation along a path. Imagine how a cartoonish car bends itself when going around a corner – as if it were in a Pixar movie.

– Vertex Animation. Example uses include a water pond with 3D liquid, or a flag waving in the wind. You can create complex animations in your favorite 3D program, and then import them into Unity as standard .mdd, .mc or .pc2 files.

– Space Warp areas of distortion. You can select a part of the world space and deform objects which enter it. The awesome part is the simplicity of this approach – once you set it up, you don’t need to track positions and parameter values – your objects get warped automatically!

And on top of that you can tweak and extend the functionality of Megafiers in the following ways:

– Deformation selection areas. Limit the effects of a deformation to part of the object.

– Import bezier spline systems from 3DS Max and Maya and turn them into meshes with the included MegaShapes Basic.

– Use together with other Assets for even more extraordinary results, e.g. create a 3D text with another asset and animate its bending with Megafiers.

– Integration with Playmaker (you can find our overview of Playmaker here). Megafiers comes with over 50 Playmaker actions for its modifiers and warps. This way you can create all these amazing 3D transformations using only visual scripting!

To sum up, the Megafiers Unity Asset is a game development powerhouse

It comes with an abundance of cool 3D tools which can transform your game – from its look and style, to its gameplay and features.

On top of that, Megafiers is plug-and-play and is easy to use even for non programmers. It is truly an amazing asset and one of the gems on the Unity Asset Store. It powers the core functionality of one of our new Ironic Games (soon to be revealed) and I personally can’t recommend it enough! 🙂

View more details about Mega-Fiers in the Unity Asset Store.