Exploder: Blow Stuff Up with Style. The Art and Science of Unity 3D Mesh Explosions. 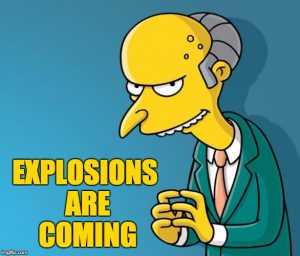 Hey everybody, I present to you Exploder – the Unity asset which makes 3D meshes go BOOM!

Every now and then I stumble upon little gems like this one on the Unity Asset Store. In making your games have you ever needed to shatter an object into hundreds of pieces? This is when this asset comes into play.

What I love most is the simplicity – just drag and drop the Exploder Prefab in your scene. After that, there are just two steps to shatter any 3D mesh object: 1) add an “Explode” tag to the object you want to destroy, and 2) call Explode() while the object is in range of the Exploder Prefab. In the core of the asset there is a powerful mesh cutter doing complex calculations, but you don’t need to worry about that – just add it to your scene and start blasting! 🙂 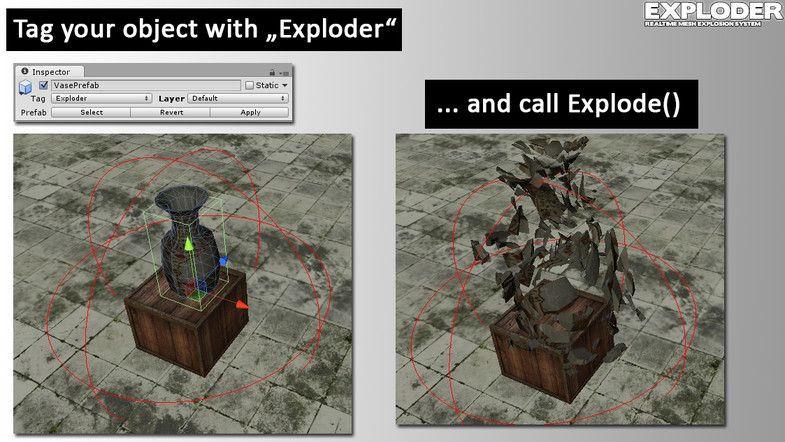 Alternatively, you can blow up objects directly from your scripts, without the need for tagging. Below is a simple example how you can do that – attach the script to the object you want to destroy and just call the ExlodeThisObject() method. But if you don’t like coding, no worries – it also comes with full integration with Playmaker.

Of course, there are dozens of settings you can tweak to fit your exact needs. You can set the radius of the affected zone, the force of the explosion, the number of fragments, whether the pieces should have colliders or not, and the frame budget in ms for the whole “show”. You can even pre-fracture an object and activate its explosion at a later time to further improve the performance.

Exploder is so neat, because it combines the best of both worlds. It is extremely simple to incorporate into an existing project, and at the same time comes with many customization options if you needs something more unique.

In essence, Exploder is the easiest way to fracture and blow up your Unity 3D models.

To sum up Exploder’s awesome features:

So, do you want to explode something with a wave of your hand? If so, just get Exploder, it’s worth it and it’s fun! 🙂

View more details about Exploder in the Unity Asset Store.