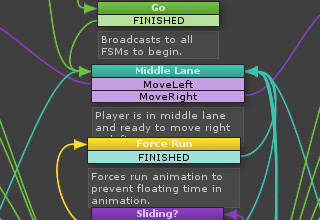 The Playmaker Unity Asset is the most popular visual scripting system for the U3D platform. It is powerful, extensible and has a 5 Star rating with close to 3,000 reviews in the Asset Store. Its best feature:

Wait, how can this be? Shouldn’t people major in Computer Science and spend thousands of hours learning complex coding paradigms in order to make stuff happen inside a game? Mm, NO.

Enter the Finite State Machine, or FSM in short (more info). Put simply, this is how Playmaker organizes behavior:

State (I’m sleeping) -> Event Transition (my cat jumps on my belly) -> Another State (I’m chasing off the damn cat).

The State Machine model is easy to learn and powerful to use. It is just another Unity component, so you can add multiple FSMs to the same GameObject. Inside the FSM you can express practically any causal relationship, but here’s the catch: you need to keep things simple! Otherwise, sooner rather than later, you will end up with Monster FSMs like this one (which I’m sad to admit, I’m actually using):

Luckily, Playmaker has great documentation and most questions you might have are already answered online (take note – support from the developer is available only through the forum).

Although Playmaker has its pitfalls (which plague all visual scripting tools), indie developers who work alone or in small teams can easily avoid most of the traps by following a few simple rules.

3 Quick Rules How to Use Playmaker the Right Way

Should I use the Playmaker Unity Asset in Production?

For a Beginner: SURE! Playmaker is tried and tested Unity asset with great documentation and a huge and helpful community of collaborators. You can get it from the Asset Store right away!

For a Seasoned Developer: it depends. Do you have a simple indie project in mind, or maybe you want to reach a playable prototype in hours instead of days? In that case – yes, Playmaker is very much worth it!

View more details about Playmaker in the Unity Asset Store.