Zombie Evolution. An honest look at the weird obsession with the undead flesh-eaters. 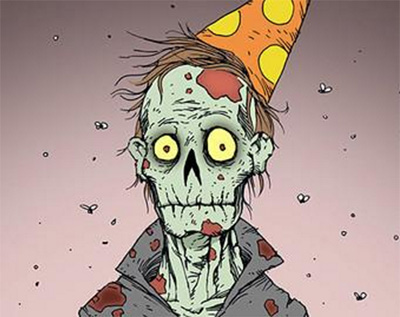 Some genres have stood the test of time. The Zombie mythos, once a minor part of Haitian folklore, today reigns supreme. The animated corpses overran our precious pop culture and left carnage in their path: movies, brutal TV shows and a whole plethora of gory computer and console games. For a cool time-lapse of the Zombie Evolution check out the awesomely creepy Top Trending video below.

So, why did these slow, dumb and ugly creatures capture the imagination of massive audiences? What is the key to the zombies’ lasting popularity? The secret is simple:

zombies are the best placeholder for both our primal and societal fears.

Inside each of us, under the layers of acquired manners and social pretense, a primal core is laying dormant. In rare moments of great anxiety and stress, we catch glimpses of its intoxicating power. Thriller movies in general allow us to feel scared again in our safe modern world, and to ride our primal instincts like we would ride a roller-coaster.

However, the search for excitement is a constant battle against reality. Civilization has surrounded us with numerous safety layers, so what is there to be scared of? Medical issues? Natural disasters? Bankruptcy?

A match for our fears

While many real-life issues are worrisome, none of them evokes the gut-wrenching reaction of true, maddening horror. The human biology is not hardwired to react to abstract dangers; to feel terrified we need to see the monster in its physical form. So, here enters the Zombie.

But what makes the zombies better than all other monsters? In pop culture, Vampires were the classic supernatural villains and they haunted silent films long before the zombies stumbled onto the scene. So why did we need to summon the clumsy brain-dead cadaver after we already had a date with the sophisticated, menacing and all too well capable of biting vampire?

It is simple. The range of dangers which the vampire can represent to us is small. His key characteristic is being single – a vile and lonesome creature which prays on solitary human beings. The Vampire Canon never evolved to a threat of massive scale, therefore it couldn’t compete in a world where globalization, pandemics and mass migration are the cornerstone issues of apocalyptic fiction.

Zombies, on the other hand, fit the modern Zeitgeist exceptionally well. So well, in fact, that the US Centers for Disease Control published a real, albeit ironic, Zombie Preparedness article. It’s a bit bizarre to see a no-nonsense institution like the CDC seize on a pop culture phenomenon, but just look at the classic zombie scenarios and how they track real-world concerns. The deadly virus caused by natural forces of selection thinning the herd (or alternatively, by irresponsible biological research) is a real danger today, and so is the social unrest surrounding such an event.

A look in the mirror

That said, the breakdown of modern society is only half of the Zombie Epic. The other, darker half comes in the form of the joyful and triumphant carnage resulting from the US vs THEM tribal mentality. The zombies look human, which works great for our blood-thirsty and adversarial primal nature. But in a brilliant twist we classify them as objects and thus we create the much needed excuse, the emotional detachment, necessary to keep our sanity while acting in a vile beastly manner. That is why you will almost NEVER see a character worry if the zombies have feelings. That is not what we need them for! The undead are here to give us an easy fix of wholesome murder, not to challenge our ethical intuitions.

Welcome to the Zombie Evolution

To sum up, the concept of a zombie emerged centuries ago as a vessel for our superstitions; a mystical creature crafted by dark Voodoo magic. As times changed, the brute evolved – but always remained what we needed it to be.

The Zombies entered mass culture in the 1930s, and at the time depicted subservient puppets in the hands of evil masters – just as the fears of Communism were on the rise. During the 60s and 70s, while the Apollo program was underway and at the height of the nuclear arms race, the undead went through another transformation and presented themselves as radioactive flesh-eaters and Astro Zombies. This trend of constant adjustments and evolution continues to this day, and we see them representing a whole spectrum of contemporary fears. While their next roles are still shrouded in the uncertainty of the future,

one thing is certain – if we fear something enough, the zombies will come to claim it. 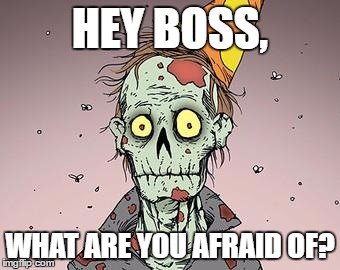