Behavior Designer (available on the Asset Store) is a Unity Game Development extension for visual scripting. With it you can create behavior trees – a series of tasks and transitions which form the AI decision making process.

The behavior trees are very powerful, but the true beauty shines in their simplicity. Whether you are a sole indie developer, or on the team of a large AAA project, Behavior Designer will help you construct complex behavior visually – no coding required!

Here is an example. Let’s say you are building an Action RPG game, and the mission is to infiltrate an enemy base. How do you control the enemy guards?

If all you need is a stationary turret which shoots at anything that moves, then you can skip the behavior tree. However, what to do if you want the guards’ actions and reactions to be more complex and realistic?

Let’s assume that the guards need to do the following: 1) patrol along a route, 2) march in a set formation, 3) pursue and surround the player if they see him, 4) search for the player if they lose track of him, 5) return to their initial route if the search is unsuccessful, and 6) call for reinforcements from the barracks. Cam you imagine to script this in a procedural way? And can you feel the pain of debugging it already? OK, so let’s turn to the other option: the behavior tree. 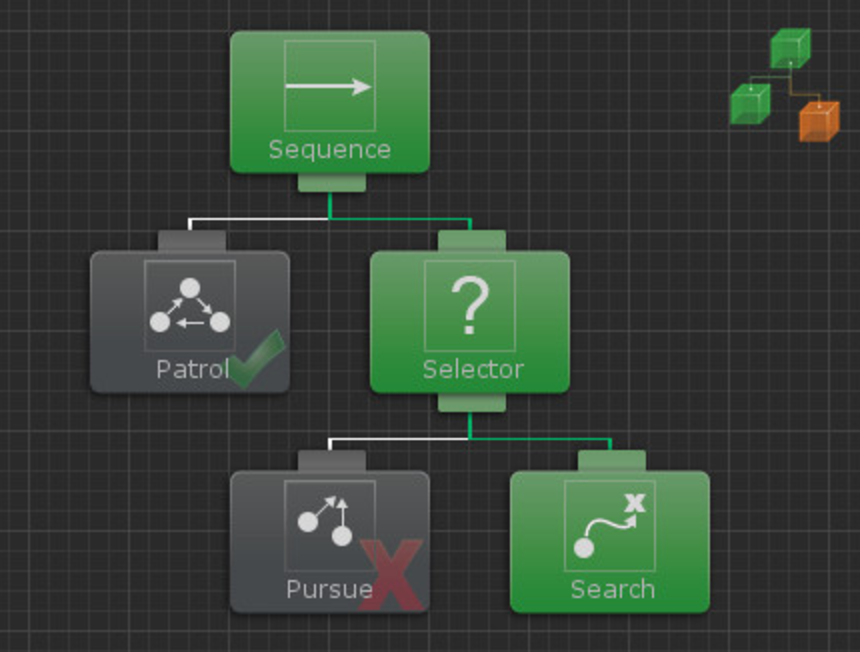 Simple behavior tree for a guard unit on patrol.

In this case – and please note that this is not a complex scenario – a procedural coding approach would be tedious and difficult. On the other hand, a behavior tree makes it much easier to organize and track these states. In result, you will save precious time and avoid stress (always a good idea) during your Unity game development efforts.

In short, Behavior Designer is suitable for both non-programmers and skillful developers

The visual nature of the asset makes it easy for people new to coding. The extension is very powerful and contains hundreds of ready-made tasks for a lifelike Unity AI. At the same time a seasoned programmer can conveniently extend the asset with all kinds of custom tasks.

Also available are 40+ supported third party assets like PlayMaker to NGUI. Furthermore, there are 3 Add On packs for Behavior Designer: Movement, Formations and Tactical. You can purchase them separately depending on your specific needs.

With regard to the developer, Behavior Designer is created by the same team who later introduced the UFPS player controller system. The team is working full time on developing Unity Assets, so you can rely on their support and updates for years to come.

To sum up, Behavior Designer is an easy and powerful way build a lifelike Unity AI – so if you need this, go get it!

UFPS: Create a 3D Shooter the Easy WayExploder: Blow Stuff Up with Style